Photosystem I(PS I).  It is a photosynthetic pigment system along with some electron carriers that is located on both the non appressed part of grana thylakoids as well as stroma thylakoids.  PS I has more of chlorophyll a. Chlorophyll b and carotenoids are comparatively less.  Its photocentre has a special chlorophyll a molecule called P700 (P703). It is surrounded by other chlorophyll a molecules, followed by chlorophyll b and carotenoids.  Photosystem I has FeS, ferredoxin, plastoquinone, cytochrome complex and plastocyanin.  It takes part in both cyclic and non-cyclic photophosphorylation.  PSI can carry on cyclic photophosphorylation independently.  Normally it drives an electron from photosystem II to NADP+.

Photosystem II (PS II).  It is a photosynthetic pigment system along with some electron carriers that is located in the appressed part of the grana thylakoids.  PS II has chlorophyll a, b and carotenoids.  Chl a  and chl b contents are almost equal.  Carotenoid content is higher as compared to that of PS I.  The photocentre is a special chlorophyll a molecule called P680 (P683). It is surrounded by other chlorophyll a molecules, chlorophyll b molecules. PS II also contains Mn2+ Cl–, quencher molecule Q, plastoquinone (PQ), cytochrome complex and plastocyanin.  It picks up electron released during photolysis of water.  The same is extruded on absorption of light energy.  As the extruded electron passes over cytochrome complex, sufficient energy is released to take part in the synthesis of ATP from ADP and inorganic phosphate.  This photophosphorylation is non-cyclic.  PS II can operate only in conjunction with PS I. 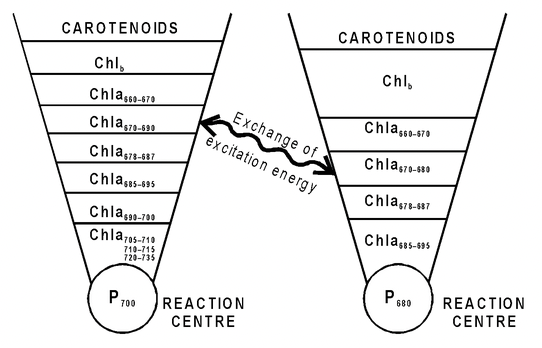 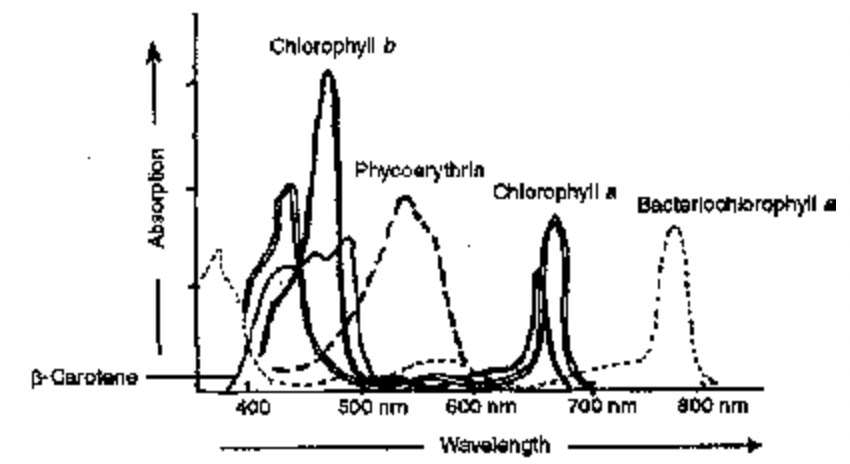 It is a graph that depicts the effectiveness of light of various wavelengths in performing a particular function.  The first action spectrum of photosynthesis was studied by T.W. Engelmann (1882) using green alga Spirogyra and aerobic bacteria.  Engelmann employed a prism to break sunlight into rainbow of different colours that fell over the aquatic alga. Oxygen seeking bacteria were found to accumulate around regions of alga according to the amount of photosynthesis performed and oxygen evolved. They were regions which received blue and red lights. 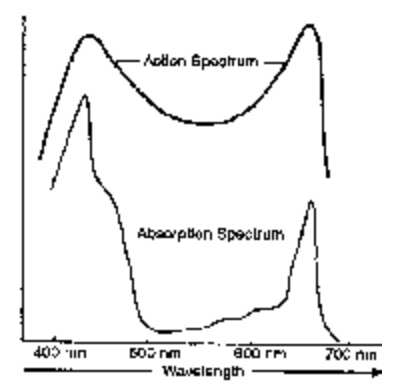 It is almost instant re-radiation of light energy by a substance after having absorbed the same.  Fluorescence stops immediately after the withdrawal or source of illumination. All types of photosynthetic pigments are fluorescent.  However, most of the fluorescence produced by green parts are due to chlorophyll  a  as all other pigments hand over absorbed energy to it through resonance.  On absorption of light energy, a fluorescent substance gets excited.  In the excited state, an outer electron moves to a higher orbital.  It is called excited singlet state.  Liberation of unutilised absorbed energy is called fluorescence.  Chlorophyll emits red fluorescence though it absorbs both blue and red wavelengths of light.  It has two peaks, one in the red region below 700 nm and the other in the far-red above 720 nm. ‘The out burst of fluorescence on initial few seconds of illumination is called as Kutusky effect’. 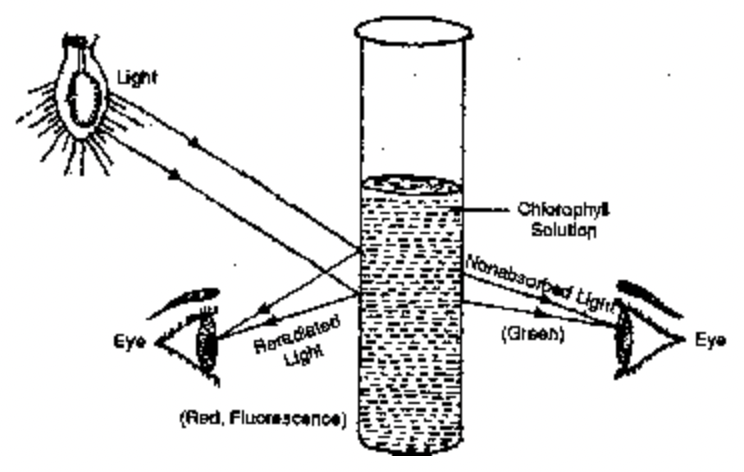