Define back bonding in BF3

Define back bonding in BF3

Back bonding is a type of bonding that occurs between atoms in a compound where one atom has one electron and the other has an empty orbital next to it. Since pi-bonding occurs after the formation of a sigma bond, a combination with back bonding has the features of pi-bonding. Boron atom, in BX3, has six electrons in the outermost orbit and thus it can accept a pair of electrons from a donor molecule like NH3 to complete its octet. Hence boron halides act as very efficient Lewis acids. The relative Lewis acid character of boron trihalides is found to obey the order ;

However, the above order is just the reverse of normally expected order on the basis relative electronegativities of the halogens. Fluorine, being the most electronegative, should create the greatest electron deficiency on boron and thus B in BF3 should accept electron pair from a donor very rapidly than in other boron trihalides. But this is not true.

Back bonding, also known as a back donation, is a chemical process in which electrons pass from a single atom to an acceptor ligand's symmetry anti-bonding orbital. Metal electrons are used to bind the ligand, releasing the excess negative charge metal.

When one atom in a compound has one pair of electrons, and the other has empty orbitals next to each other, this bonding process is possible. Since pi-bonding occurs after forming a sigma bond, a combination with back bonding has the characteristics of pi-bonding. The bond angle is affected by back bonding when lone pair is required to bond back to the central atom, the bond angle increases. 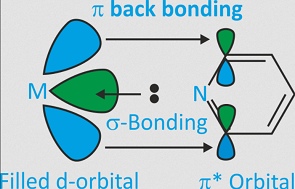 Anomalous behaviour of BF3 has been explained on the basis of the relative tendency of the halogen atom to back-donate its unutilised electrons to the vacant p orbitals of boron atom. In boron trifluoride, each fluorine has completely filled unutilised 2p orbitals while boron has a vacant 2p orbital. Now since both of these orbitals belong to same energy level (2p) they can overlap effectively as a result of which fluorine electrons are transferred into the vacant 2p orbital of boron resulting in the formation of an additional p-pi – p-pi bond. This  type of bond formation is known as back bonding or back donation. Thus the B- F bond has some double bond character. Back bonding may take place between boron and one of the three fluorine atoms and thus boron trifluoride is regarded as a resonance hybrid of some structures.

Resonance in boron trifluoride is also evidenced by the fact that the three boron-fluorine bonds are indentical and are shorter than the usual single boron-fluorine bond. As a result of back bonding, the electron deficiency of boron is reduced and hence Lewis acid nature is decreased. The tendency for the formation of back bonding (p-pi- p-pi bond) is maximum in BF3 and decreases very rapidly from BF3 to BI3 This is probably due to the fact that overlapping of the vacant 2p orbitals of boron cannot take place easily with the p-orbitals of high energy levels (3p in Cl, 4p in Br and 5p in iodine). Thus BI3 Br3 and BCl3 are stronger Lewis acids than the BF3.