Oxides of Sodium: The possible oxides of Na are Na2O and Na2O2.

It is obtained by burning sodium at 180o C in a limited supply of air or oxygen and distilling off the excess of sodium in vacuum, or by heating sodium peroxide(Na2O2), nitrate(NaNO3) with sodium

It is formed by heating the sodium metal in excess air or oxygen. The air should be moisture free and temperature required is 300o C.

(i) It is pale yellow solid becoming white in air due to the formation of a film of sodium hydroxide and carbonate.

(ii) It dissolves in ice - cold water with hydrolysis, yielding hydrogen peroxide, which decomposes into water and oxygen on warming; whereas it gives oxygen and caustic soda with water at room temperature,

Potassium forms number of oxides namely,K2O,K2O2 and KO2 . Other two oxides can also exist which are K2O3 and KO3

It is solid, yellow when hot and white when cold, obtained by heating potassium nitrate with potassium.

It dissolves in water to give KOH like Na2O

Controlled oxidation of potassium in excess air or oxygen at 300o C gives mainly K2O2. It gives H2O2 when dissolves in water.

It is made by burning potassium in a good supply of air or oxygen. It is powerful oxidising agent. It reacts with water giving both oxygen and hydrogen peroxide.

(i) It is used in the manufacture of paper, soap and artificial silk.

(ii) It is used in petroleum refining.

(iii) It is used for mercerizing cotton.

(iv) It is used for the preparation of sodium metal and many salts of sodium.

Pure KOH is obtained by adding potassium sulphate to a hot saturated solution of Ba(OH)2.BaSO4 is filtered off and filtrate is evaporated in a silver dish.

(i) In the absorption of carbon dioxide, caustic potash is preferred to caustic soda, since the KHCO3 formed after sufficient absorption is soluble, while NaHCO3 is insoluble and may,therefore choke the tubes.

(ii) As an alkaline reagent KOH is not used while NaOH is used because NaOH is cheaper than KOH.

Sodium carbonate is generally prepared by a process called the ammonia – soda process or solvay process as described below:

When carbon dioxide gas is bubbled through a brine solution saturated with ammonia, it results in the formation of sodium hydrogen carbonate.

Sodium hydrogen carbonate so formed precipitates out because of the common ion effect caused due to the presence of excess of NaCl. The precipitated NaHCO3 is filtered off and then ignited to get Na2CO3.

The various parts for the manufacture of Na2CO3 by solvay process have been illustrated in figure below.

Plant used for the manufacture of washing soda

A 30% solution of brine is saturated with ammonia (from recovery tower) is introduced into absorber tower. Various impurities like calcium and magnesium salts present in the commercial NaCl precipitate out as corresponding insoluble carbonates. (which comes along with ammonia from the ammonia recovery plant)

The ammoniated brine is filtered to remove the precipitated calcium and magnesium carbonate.

It is high tower fitted with perforated plates. Ammoniated brine solution is made to trickle down from the top of the tower while CO2 gas from the lime kiln is admitted from the base of the tower. CO2 rises through the small perforations and its interaction with ammoniated brine results in the formation of insoluble sodium hydrogen carbonate.

The solution containing crystals of NaHCO3 is drawn off from the base of the carbonation tower and filtered to get NaHCO3.

The carbon dioxide produced here is sent to carbonation tower.

The filtrate, after removal of NaHCO3 contains ammonium salts such as NH4HCO3 and NH4Cl.

The filtrate is mixed with Ca(OH)2 and is heated with steam in ammonia recovery tower.

The mixture of ammonia and CO2 gases is obtained which is used for saturation of brine while calcium chloride is obtained as a by – product.

The CO2 gas goes to the carbonation tower while lime is slaked with water in tank known as slakes to form ca(OH)2.

The overall reaction taking place in solvay process is 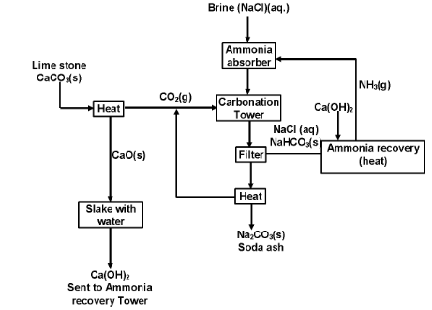 (ii) It dissolves in acids with an effervescence of carbondioxide and is causticised by lime to give caustic soda.

(iv) Hydrolysis – being a salt of a strong base (NaOH) and weak acid (H2CO3), when dissolved in water sodium carbonate. Undergoes hydrolysis to form an alkaline solution

(i) It is used for softening hard water.

(iii) As an important laboratory reagent both in qualitative and quantitative analysis.

(iv) It is used in paper, paints and textile industries.

(v) It is used for washing purposes in laundry.

(vi) It is used in the manufacture of glass, borax, soap and caustic soda.

It is also known as pearl ash. It is made by passing CO2 into a conc. solution of the chloride, containing hydrated mangesium carbonate in suspension at 20°C when an insoluble potassium hydrogen magnesium carbonate is precipitated.

The precipitate is separated by filtration, and then decomposed either by heating with water under pressure at 140°C or by the action of magnesium oxide below 20°C.

(i) It is white, deliquescent solid

(ii) K2CO3 resembles Na2CO3 in properties, but is more alkaline and more soluble than Na2CO3.

(i) It is sparingly soluble in water

(ii) When heated between 250°C and 300°C, it is converted into pure anhydrous sodium carbonate which can be used for standardising acids.

It is made by absorbing CO2 in moist potassium carbonate and then drying the product in a porous plate.

KHCO3 resembles NaHCO3, but is much more soluble in water. The solution is strongly alkaline owing to hydrolysis.

It is also called common salt occurs abundantly in nature as rock salt or halite. The most abundant source is sea-water where sodium chloride occurs to the extent of 2.6 – 2.9 percent. The sea water is exposed to the sun and air in large shallow pits. The gradual evaporation of water leading to the crystallization of the salt. The purification is done by dissolving the salt in minimum volume of water and filtering, if necessary, to remove insoluble impurities. The solution is then saturated with a current of dry hydrogen chloride whereby crystals of pure sodium chloride separate out.

(i) NaCl is a colourless crystalline salt, almost insoluble in alcohol and highly soluble in water.

It is colourless cubic crystal like solid soluble in water. Its solubility increases almost linearly with temperature.

The anhydrous salt known as salt cake, is prepared on an industrial scale by heating strongly sodium chloride with conc. sulphuric acid.

Glauber’s salt or hydrated sodium sulphate, Na2SO4⋅10H2O is prepared from salt cake by crystallisation from water below 32°C This temperature represents the transition temperature for Na2SO4 and Na2SO4.10H2O.

It is colourless salt, crystallising in large monoclinic prisms. It is exceedingly soluble in water.

It is obtained by strongly heating potassium chloride with conc. H2SO4

It is colourless crystalline salt, m.p. 1070°C. It is less soluble in water than sodium sulphate and has no hydrate like the later.