Sodium is the 7th most abundant element by weight found in earth’s crust.

Sodium is extracted by Down’s process through electrolysis of fused sodium chloride.

(i) The melting point of sodium chloride is very high it is very difficult to maintain it in the molten state during electrolysis.

(ii) Sodium is considerably volatile at the temperature needed for the electrolysis and therefore, a part of the metal produced is vapourised.

(iv) Both sodium and chlorine, the two products of the electrolysis, have a corrosive action on the material of the vessel employed for the electrolysis at such a high temperature.

The cell consists of a steel tank lined with fire bricks. A circular graphite anode is placed in the centre of the cell which is surrounded by a cylindrical iron cathode. The anode and cathode are separated by a steel gauge cylinder through which molten sodium chloride can pass but molten sodium cannot. The purpose of using steel gauge is to keep sodium separate from chlorine which would otherwise react with chlorine. The anode is covered by a dome – shaped steel hood which provides the out – let for the escape of chlorine gas. The molten metal liberated at the cathode moves up and flow into the receiver containing kerosene oil. The following reactions take place: 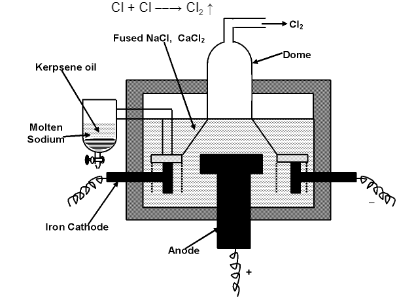 3. It imparts golden yellow flame when introduced into Bunsen flame.

Sodium is more reactive than lithium.

(i) Action of air and moisture

It is tarnished rapidly on exposure to moist air.

First a film of sodium monoxide, Na2O is formed which changes readily into sodium hydroxide by action of moisture and finally into sodium carbonate by the action of CO2 present in air.

It is therefore kept under kerosene. 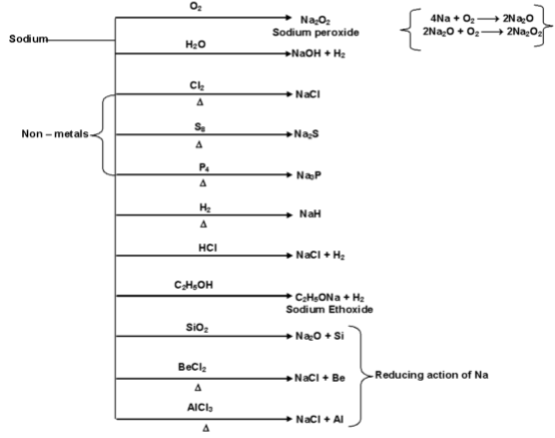 Sodium dissolves in liquid ammonia to form blue solution which is a good conductor of electricity.

However, when ammonia is passed through molten sodium, it yield sodamide evolving H2 gas.

(i) Sodium is used as a reducing agent in the extraction of boron and silicon.

(ii) Liquid sodium or its alloy with potassium is used as coolent in nuclear reactors.

(iii) Sodium as well as sodium amalgam are used as reducing agents in organic synthesis.

(iv) It is used in Lassaigne’s test for the detection of N, S and halogen in organic compounds.

(vi) It is largely used for production of artificial rubber, dyes, drugs etc.

(vii) Sodium-lead alloy is used for preparation of tetraethyl lead. Pb(C2H5)4 which is used as an anti-knocking agent in petrol.