The elements in the long form of the periodic table has been divided into four blocks, namely s, p, d & f blocks. The elements of group I & II receive their last electron in S – orbital. So they are called as s – block elements.

The metals Lithium (Li), sodium (Na), potassium (K), rubidium (Rb), caesium (Cs) and francium (Fr) which have one electron in their outermost shell belongs to group I and are called alkali metals as they react with water to form hydroxides which are strong bases or alkalies.

The first element of a group differs considerably from the rest of the elements of the same group. This anomalous behaviour is due to

(i) Smaller size of their atoms

(iv) Absence of vacant d – orbitals is their valence shell

On moving diagonally some members show similar properties with the members of next higher group which is particularly seen in the elements of second and third periods of the periodic table. However the similarities shown are far less pronounced than the similarities with in a group.

The main reasons for the diagonal relationship are

(i) Similarity in electropositive character

The atomic and ionic radii decrease across a period and increase in a group. Evidently on moving diagonally, the two trends partially cancel out. As a result, diagonally related elements have similar atomic & ionic radii and hence have similar properties.

The group I comprising Li, Na, K, Rb, Cs & Fr are commonly called alkali metals. Francium is radioactive and has a very short life (half life of 21 minutes), therefore very little is known about it. 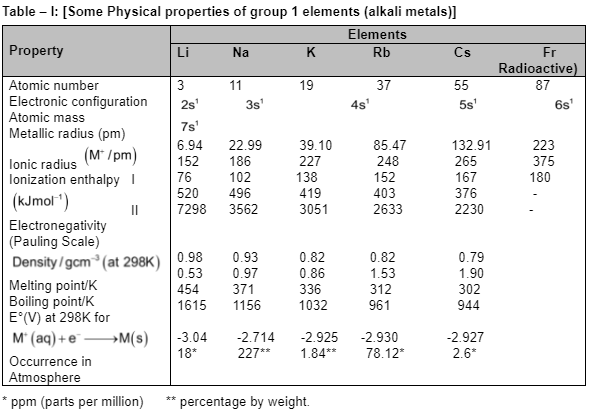