Solids And Fluids of Class 11

Suppose a liquid is flowing in streamlined motion on a fixed horizontal surface AB. The layer of the liquid which is in contact with the surface is at rest, while the velocity of other layers increases with distance from the fixed surface. In the figure, the lengths of the arrows represent the increasing velocity of the layers. Thus there is a relative motion between adjacent layers of the liquid. Let us consider three parallel layers a, b and c. Their velocities are in the increasing order. The layer a tends to retard the layer b, while b tends to retard c.

Thus each layer tends to decrease the velocity of the layer above it. Similarly, each layer tends to increase the velocity of the layer below it. This means that in between any two layers of the liquid, internal tangential forces act which try to destroy the relative motion between the layers. These forces are called ‘viscous forces’. If the flow of the liquid is to be maintained, an external force must be applied to overcome the dragging viscous forces. In the absence of the external force, the viscous forces would soon bring the liquid to rest.

The property of the liquid by virtue of which it opposes the relative motion between its adjacent layers is known as viscosity.

The property of viscosity is seen in the following examples:

(i) A stirred liquid, when left, comes to rest on account of viscosity. Thicker liquids like honey, coaltar, glycerine, etc. have a larger viscosity than thinner ones like water. If we pour coaltar and water on a table, the coaltar will stop soon while the water will flow upto quite a large distance.

(ii) If we pour water and honey in separate funnels, water comes out readily from the hole in the funnel while honey takes enough time to do so. This is because honey is much more viscous than water. As honey tends to flow down under gravity, the relative motion between its layers is opposed strongly.

(iii) We can walk fast in air, but not in water. The reason is again viscosity which is very small for air but comparatively much larger for water.

(iv) The cloud particles fall down very slowly because of the viscosity of air and hence appear floating in the sky.

Viscosity comes into play only when there is relative motion between the layers of the same material. This is why it does not act in solids.

Reynold proved that the critical velocity for a liquid flowing in a tube is vc = kη/ρa, where ρ is density and η is viscosity of the liquid, a is radius of the tube and k is ‘Reynold’s number’ (whose value for a narrow tube and for water is about 1000). When the velocity of flow of liquid is less than the critical velocity, then the flow of the liquid is controlled by the viscosity, the density having no effect on it. But when the velocity of flow is larger than the critical velocity, then the flow is mainly governed by the density, the effect viscosity becoming less important. It is because of this reason that when a volcano erupts, then the lava coming out of it flows speedly inspite of being very thick (of large viscosity).

Velocity Gradient and Coefficient of Viscosity

Suppose a liquid is flowing in stream-lined motion on a horizontal surface OX. The liquid layer in contact with the surface is at rest while the velocity of other layers increases with increasing distance from the surface OX. The highest layer flows with maximum velocity. Let us consider two parallel layers PQ and RS at distance z and z + Δz from OX. Let vx and vx + Δvx be their velocities in the direction OX. Thus the change in velocity in a perpendicular distance Δz is Δvx. That is, the rate of change of velocity with distance perpendicular to the direction of flow is Δvx/Δz. This is called velocity-gradient.

(i) It is directly proportional to the contact-area A of the layers (F ∝ A).

Dimensions and Unit of Coefficient of Viscosity: From the above formula, we have

Steady Flow of Liquid through a Capillary Tube: Poiseuille’s Formula

If l and a be the length and radius of the tube and p the pressure difference across its ends, then the volume of the liquid flowing per second through the tube is given by

Where η is the coefficient of viscosity of the liquid. This is known as ‘Poiseuille’s formula’.

Effective Force on a Body Falling in a Liquid: Stoke’s Law

When a body falls through a liquid, ordinarily two forces act upon the body: weight of the body and the upthrust force due to the buoyancy of the liquid. As an example, suppose we drop a lead ball in a long jar filled with water. Let V be the volume and ρ the density of the ball. Then the mass of the ball is

where σ is the density of water. The effective downward force on the ball is

The acceleration of the ball in water will be

If we drop marble (ρ = 2.5) ball, instead of lead ball, in water, then the acceleration of the marble in water is

The acceleration of the lead ball in water is nearly one and half times the acceleration of the marble ball. In the above calculation we have not considered the effect of viscosity of water. Clearly, the difference in densities of the bodies affects the motion of bodies falling in liquid.

Now, we consider the viscosity of water. The velocity of the falling ball goes on increasing due to the effective force V(ρ - σ)g acting downward on the ball. The layer of water in contact with the ball tends to move with the velocity of the ball. The layer of water in contact with the ball; while the layer far away from the ball remains at rest. Thus as a result of the motion of the ball, there is a relative motion between adjacent layers of water. Hence a viscous force is developed in water which increases with increasing velocity of the ball, and a stage is reached when the opposite viscous force becomes equal to the effective force driving the ball. The net force on the ball is now zero and the ball attains a constant velocity called the ‘terminal velocity’. Thus viscous force limits the speed of the body falling in a liquid.

Stokes showed that if a small sphere of radius r is moving with a terminal velocity v through a perfectly homogeneous medium (liquid or gas) of infinite extension, then the viscous force acting on the sphere is

where η is the coefficient of viscosity of that medium.

Since the ball is moving with a constant velocity v i.e., there is no acceleration in it, the net force acting on it must be zero. That is

Thus, terminal velocity of the ball is directly proportional to the square of its radius.

A drop of water of mass m = 0.2 g is placed between two clean glass plates, the distance between which is 0.01 cm. Find the force of attraction between the plates. Surface tension of water = 0.07 Nm-1.

(meniscus is cylindrical in shape)

Thus pressure between the plates is less than the atmospheric pressure and so the plates are pressed together as though attracted towards each other. 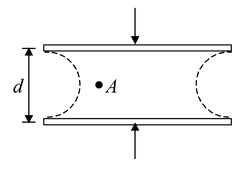 If A is the cross-sectional area of the tube and L its length, the initial volume of air inside it will be V1 = AL while pressure p1 = po = atmospheric pressure.

If the seal is broken the pressure inside the capillary will become atmospheric, i.e. po while capillarity will take place and the rise will be

However, the length of the tube outside the water is 0.11 - 0.01 = 0.1 m; so the tube will be of insufficient length and so the liquid will rise to the top of the tube and will stay with radius of meniscus,

A conical glass capillary tube of length 0.1 m has diameters 10-3 and 5 × 10-4 m at the ends. When it is just immersed in a liquid at 0oC with larger diameter in contact with it, the liquid rises to 8 × 10-2 m in the tube. If another cylindrical glass capillary tube B is immersed in the same liquid at 0oC, the liquid rises to 6 × 10-2 m height. The rise of liquid in the tube B is only 5.5 × 10-2 m when the liquid is at 50oC. Find the rate at which the surface tension changes with temperature considering the change to be linear. The density of the liquid is (1/14) × 104 kg/m3 and angle of contact is zero. Effect of temperature on density of liquid and glass is negligible.

So rate of change of surface tension with temperature assuming linearity,