(i) n−butane and isobutane are chain isomers. 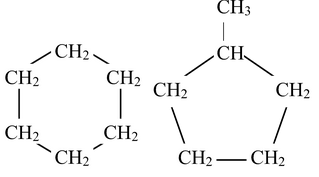 This isomerism arises due to the difference in position of either substituent or functional group in the same carbon chain.

These isomers have same molecular formula but they differ only in the presence of different functional groups.

A very common form of tautomerism is that between a carbonyl compound containing an α hydrogen and its enol form. This type of isomerism is also known as keto−enol isomerism.

In simple cases (R" = H, alkyl, OR, etc) the equilibrium lies more towards the left. The reaction can be seen by examining the bond energies of various bonds. The keto form differs from the enol form in possessing a C − H, a C − C, and a C = O bond whereas the enol form has a C = C, a C − O and an O − H bond. The keto form is thermodynamically more stable than enol form and enol forms are normally not isolated. However in certain cases, a larger amount of the enol form is present, and it can even be the predominant form.

The percentage of enol form increases in the order simple aldehydes and ketones < β−keto esters < β−diketones < β−diketones having phenyl group < phenols. This increase in the enol content is due to the fact that the enol form of the above type of compounds is increasingly stabilized by resonance and hydrogen bonding than the corresponding keto form. There are four main types of the more stable enol forms.

(1) Molecules in which the enolic double bond is in conjugation with another double bond. For example in molecules like acetoacetic ester, the enol form is stabilized by internal hydrogen bonding, which is unavailable to the keto form.

(2) Molecules that contain two or three bulky aryl groups. For example, in 2,2−dimesitylethenol, the keto content at equilibrium is only 5%.

In such cases, the steric hindrance destabilizes the keto form. In the enol form, two aryl groups are about 120° apart, but in keto form they must move closer together (~109.5°). Such compounds are often called Fuson−type enols.

The enol form of such compounds can be kept at room temperature for long period of time becaue the tautomerization reaction is very slow, owing to the electron−withdrawing nature of the fluorines.

(4) The enol content would be more than the keto form if the former is stabilized by aromaticity. For example, phenol is an enol form.

(Note: The tautomers are not counted while finding the total number of isomers for a given molecular formula)

It is caused by the attachment of different radicals/groups to a polyvalent atom (i.e. an atom having more than one valency). A metamer can be obtained by shifting one or more CH2 groups from one side of the polyvalent functional group to the other side. These isomers are of same homologous series. Metamerism is found to occur in amines, ethers, ketones, esters etc.