Whenever a reaction takes place in organic chemistry, the reactants are not directly transformed to the products. The reaction proceeds via some intermediates which are formed during the course of reaction and are not very stable species.

The most common transient intermediates formed are radicals, carbocations and carbanions but other reactive intermediates possible are carbenes, nitrenes and benzynes. The formations of these intermediates and their characteristic reactions have been dealt here in brief.

Their formation is initiated mostly by ultra−violet light. For example,

This alkyl group bearing an odd unpaired electron is called alkyl radical. The radicals are electron deficient and paramagnetic in nature. A free radical has carbon in the sp2 hybridised state, thus exhibit planar (flat) structure. If a free radical with three different atoms or group of atoms is attacked by another radical, it leads to the generation of a stereocentre, existing as enantiomeric pair.

The free radicals can act as electrophiles which attack at the site of high electron density on the substrate.

Rearrangement among radicals is found to be much less common than otherwise similar rearrangements that involve carbocations. In this they resemble carbanions and the reason for their resemblance becomes apparent when we compare the transition states (T.S.) of the three for a 1,2−alkyl shift (for detail see carbocation section).

These transition states involve two, three and four electrons, respectively and electrons in excess of two can be accommodated only in an anti−bonding molecular orbital of much higher energy. However as with carbanions, 1,2−aryl shifts are also known in radicals, which involve stabilized, bridged transition state. The driving force for the rearrangement is to attain stability. At this state, digest this fact that the stability order of free radicals is 3° > 2° > 1°. This order of stability would be explained later.

Carbocation intermediate formation is initiated by the presence of highly polar ion−solvating medium. For example,

Here, the resulting carbocation is stabilized by the delocalization of the charge over other carbon atoms. Carbocation is the carbon containing intermediate bearing a positive charge and having a sextet of electrons in its outermost shell. The carbocation can act as a electrophile.

First considering the case in which carbocation undergoes rearrangement without change in carbon skeleton. For example, 1−propyl cation rearranges to 2−propyl cation by the migration of a hydrogen atom with its electron pair (i.e. as H−) from C2 to the carbocationic C1 by 1,2−hydride shift.

This reflects the greater stability of a secondary carbocation rather than a primary carbocation. However, shift in the reverse direction can also take place where this makes available the greater delocalization possibilities of the π−orbital system of a benzene ring.
(i.e. Tertiary → Secondary). For example,

The reverse rearrangement of even tertiary to secondary or primary carbocation can take place in special circumstances. For example, 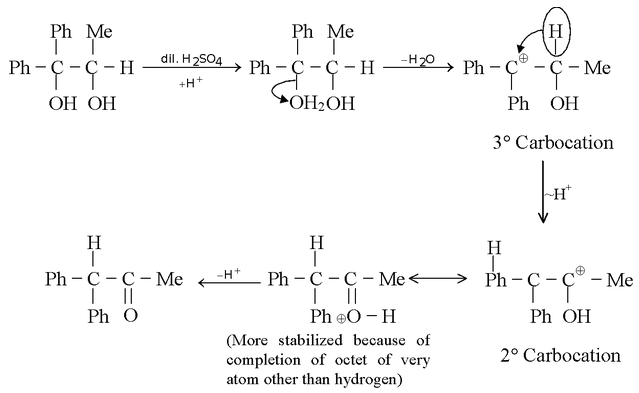 Here, the rearrangement is facilitated because the 2° carbocation produced is stabilized by the lone pair delocalization (as the carbon bearing positive charge is attached to an atom having lone pairs) due to which the octet of every atom gets complete except for hydrogen which have a duplet.

Now, considering the case in which the carbocation rearrangement involves change in carbon length. For example,

It must be borne in mind that rearrangement does not necessarily always involve change in carbon length. Sometimes no rearrangement takes place as the initially generated carbocation is having greater stability than the one obtained after rearrangement. For example,

Carbocations has a trigonal planar structure as the carbon atom of carbocations is also sp2 hybridised. A carbocation can act as a electrophilic reagent and if a carbocation with three different atoms or group of atoms is attacked by a nucleophile, it leads to the formation of racemic mixture.

Their generation is also initiated by polar reagents. For example,

Here, the carbanion formed is stabilized by delocalization.

Sometimes by heating also the carbanion can be generated. In this case, CO2 is eliminated by heating which is rapid because it is thermodynamically stable produced as it is gaseous and stabilized by resonance. Here, CO2 leaves without electron pair, leaving it for R and
thus producing R−

Carbanion is thus the carbon containing intermediate species bearing a negative charge and having a octet of electrons in its valence shell. The carbanions act as nucleophile and can add to the groups like C = O, C ≡ N,

Carbanion formation is by far the most important intermediate because of their participation in a wide variety of reactions of synthetic utility. Carbanion assume a pyramidal configuration as carbon atom here is sp3 hybridised. The unshared electron pair would be accommodated in an sp3 orbital.

These intermediates are generated by the α−elimination of trihalomethane. For example,

Carbenes are electrically neutral carbon containing species with two bond pairs and one unshared pair of electrons. They are electron deficient species and acts as electrophiles. The common reactions in which they are formed as intermediates are Reimer−Tiemann reaction, Carbylamine reaction etc. Some other familiar processes by which carbenes are chiefly generated are

(i) Thermolysis of trichloro acetate ion.

(ii) Photolysis of ketene and diazomethane. 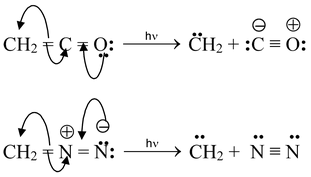 Carbenes are very reactive and it is often difficult to prove that they are actually present in a given reaction.

The carbon of singlet and triplet carbenes are sp2 and sp hybridized respectively. The structures of the two are represented as

The singlet CCl2 and CBr2 are also bent with angles of 100° and 114° respectively. Singlet carbene is the less stable form and is often (although not always) the form first generated, in the initial photolysis.

There are some reactions reported in which carbene is not isolated as such but involves carbene formation. In these reactions, it is not the free carbene intermediate, the carbenes are generated in situ called as carbenoids. A familiar example of this is Simmon−Smith reaction.

Such intermediates result from the elimination of a proton and a leaving group (generally halogen) from the same atom of a substrate. For example,

Other ways of generating nitrenes are α−elimination of N−alkyl sulphonate esters and photolytic or thermal decomposition of azides.

These intermediates are generated by the elimination of a proton and a leaving group (generally halogens) from the adjacent carbons from a benzene ring system. For example,

Benzynes are very reactive. Neither benzyne nor any other aryne (substituted benzyne) has yet been isolated under ordinary conditions. The triple bond in benzynes is not identical with the formal triple bond of alkynes because here the two π−bonds are formed by the overlapping of Pz−Pz and sp2 − sp2 orbitals whereas in alkynes, they are formed by the orbital overlap of Pz − Pz and Py − Py.

It should be noted that the π−bond (resulted from sp2−sp2 overlap) is a very weak bond which can be easily ruptured by the attack of a nucleophile, thus making the benzynes very reactive. Another feature to be noted is that the extra pair of electrons does not affect the aromaticity (this will be discussed later). The original sextet still functions as a closed ring and the two additional electrons are merely located in a π−orbital that covers only two carbons.

In a reaction where benzyne is formed, if the solution does not have sufficient nucleophile, they undergo dimerization to give biphenylene.